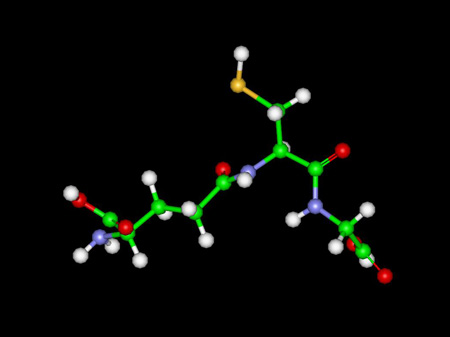 Glutathione (GSH) is considered a master  antioxidant not just in humans but in plants and all animals. Glutathione is capable of preventing damage to important cellular components caused by reactive oxygen species.  It’s a key for preventing aging, cancer, heart disease, dementia, and other chronic diseases. Glutathione is a combination of three amino acids − cysteine, glycine, and glutamine − and it is produced naturally in the liver. It is called “the master antioxidant” because it can regenerate itself in the liver after each fill-up of free radicals and go back to work.

Image: Glutathione is a combination of cysteine, glycine and glutamine.

How does Glutathione work as an antioxidant?

The thiol group (C-SH) acts as a reducing agent.

Glutathione reduces disulfide bonds formed within cytoplasmic proteins to cysteines by serving as an electron donor. In the process, glutathione is converted to its oxidized form, glutathione disulfide (GSSG), also called L-(–)-glutathione.

Once oxidized, glutathione can be reduced or regenerated back by glutathione reductase, using NADPH as an electron donor.  The ratio of reduced glutathione to oxidized glutathione within cells is often used as a measure of cellular oxidative stress.

Your supply of glutathione seems to decrease as you get older, possibly because your body can't create as much. Lower glutathione levels appear to go hand-in-hand with poorer health. For instance, lower levels may play a role in many conditions that are more likely to develop in older people.

WHAT ARE THE BEST CULINARY SCHOOLS IN AMERICA?